Song: THE TIME TO CHANGE IS NOW

BEAN: “My close friend Nicole is dying of primary immunodeficiency disease and cancer and has up to five years to live. I just reconnected with her a little over a year ago and we have been chatting and meeting almost every day. She is such a strong person who takes on each day with such positivity and strength.” 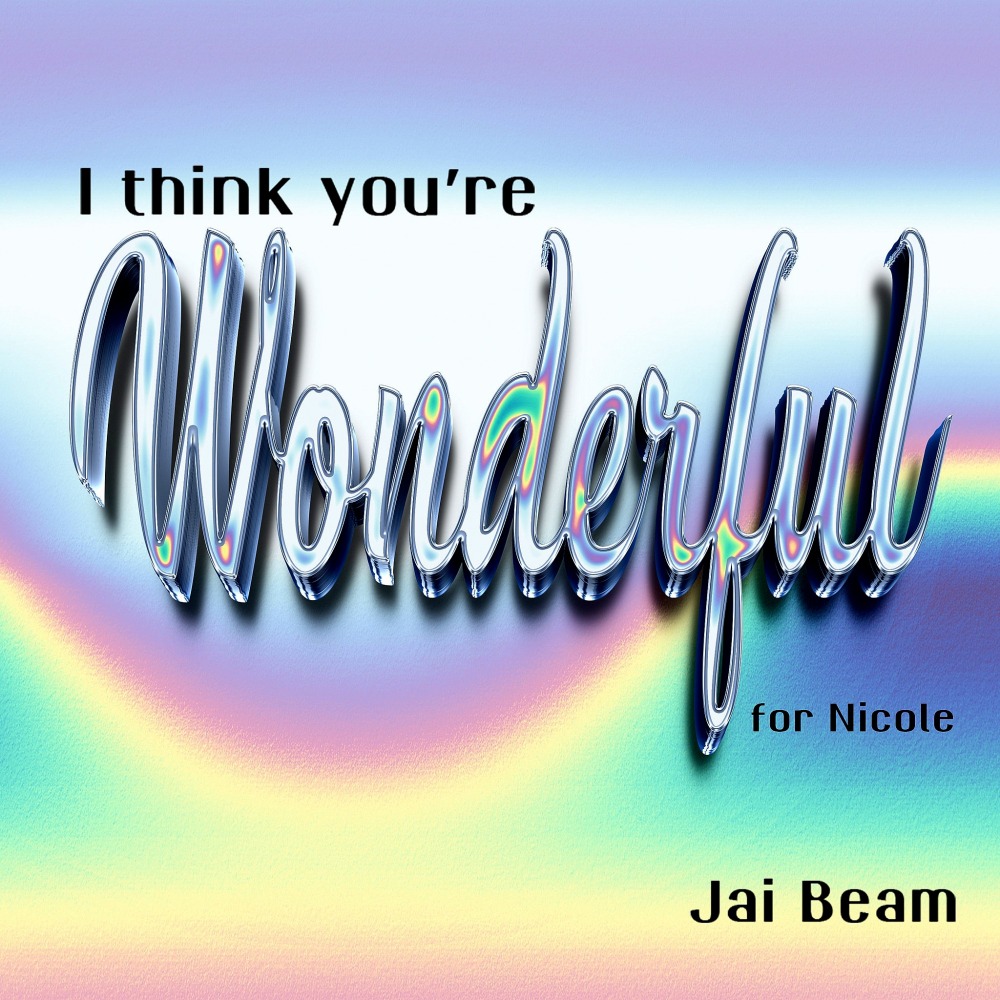 This tribute is a tender and emotive electro-pop tune, with warm 60s organ fragments, other synth dynamics and Beam‘s amiable voice. Dedicated to his friend Nicole, who suffers from her battle with cancer. Unfortunately, countless people are fighting against that awful disease, they’re all wonderful too. 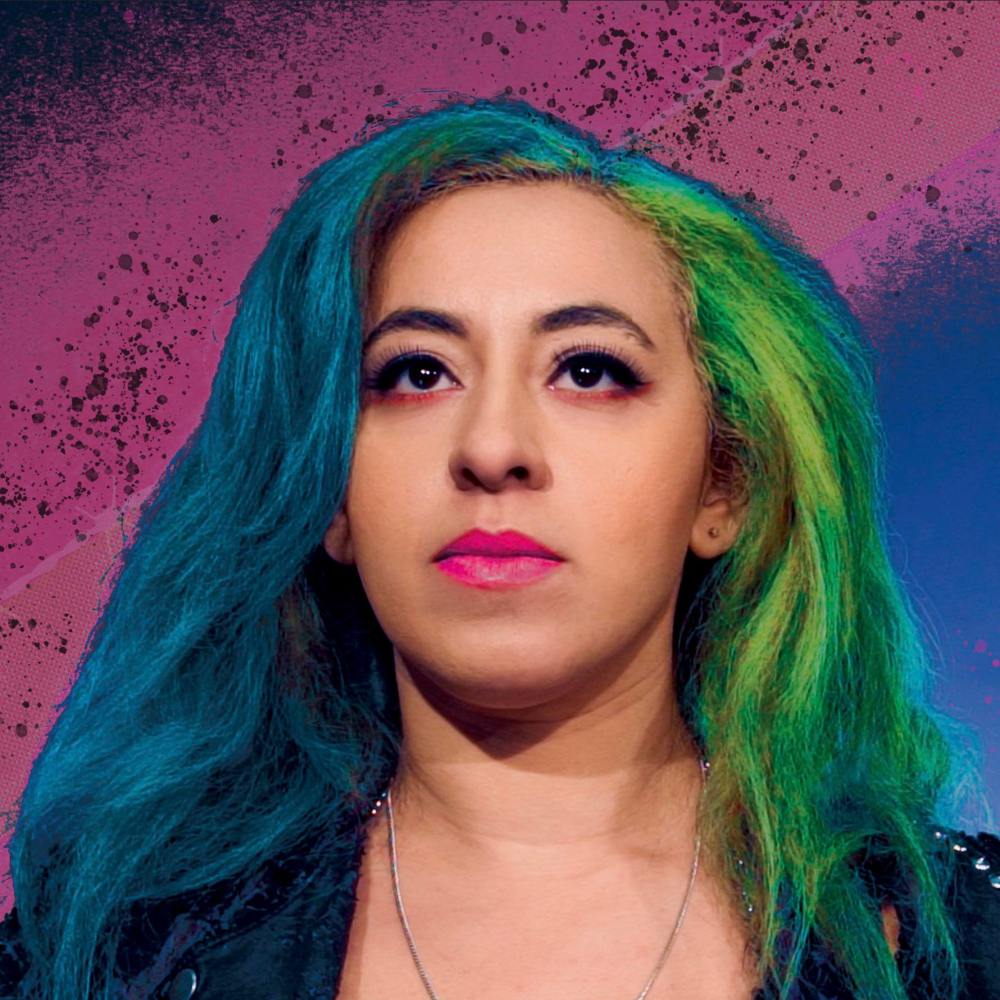 Now to tie in with the FIFA World Cup 2022 tournament she just shared a new single,
named FUN WHEN YOU’RE WINNING. A steadfast Joan Jett-esque rocker fueled by mad
as a hatter guitars, a hard-hitting rhythm section and resolute vocals.

We all should support The Kut and make her win the
World Cup for all suppressed women in the world.

The video features Diana Bartmann (drums) and
Daisy Pepper (bass), and is directed by Mike Gripz.

Image on top: cover of the GRIT album.

“Luck,” was inspired by a nostalgia for being a young teenager in a small town.
The conflicts of the time felt so simple when looking back through the lens of
adulthood. There’s a calm narrative throughout the verses but we wanted to
capture an unhinged energy in the choruses that really reflects a desire to go
back to the innocence of youth when that concept becomes an impossibility.”

TUTV: The vitalizing backbone of Luck is an infectious keyboard vibe that
sticks on the spot. On the other hand heated vocals and an ablaze guitar
sequence inject this earworm with gusto and verve. Don’t hesitate, get
on the bus. Thrilling score!

Would you let your daughter go out with them? (photo by Broes Vanmullem)

Until last Saturday – when they crashed into my hometown of Ghent (Belgium) I never heard of Belgian turbine BARNO KOEVOET AND THE DUIJMSCHPIJKERS. Now my still vibrating ears can testify about these freaked-out misfits. The man in the middle Barno Koevoet (Barno Crowbar) is a manic motherfucker with 4 lungs. Just insane. He screams as if his tattoo body is pierced with sharp-cutting thumbtacks (Duijmschpijkers). No idea what demons they’re fighting, but I put my money on Barno and his deafening gang. 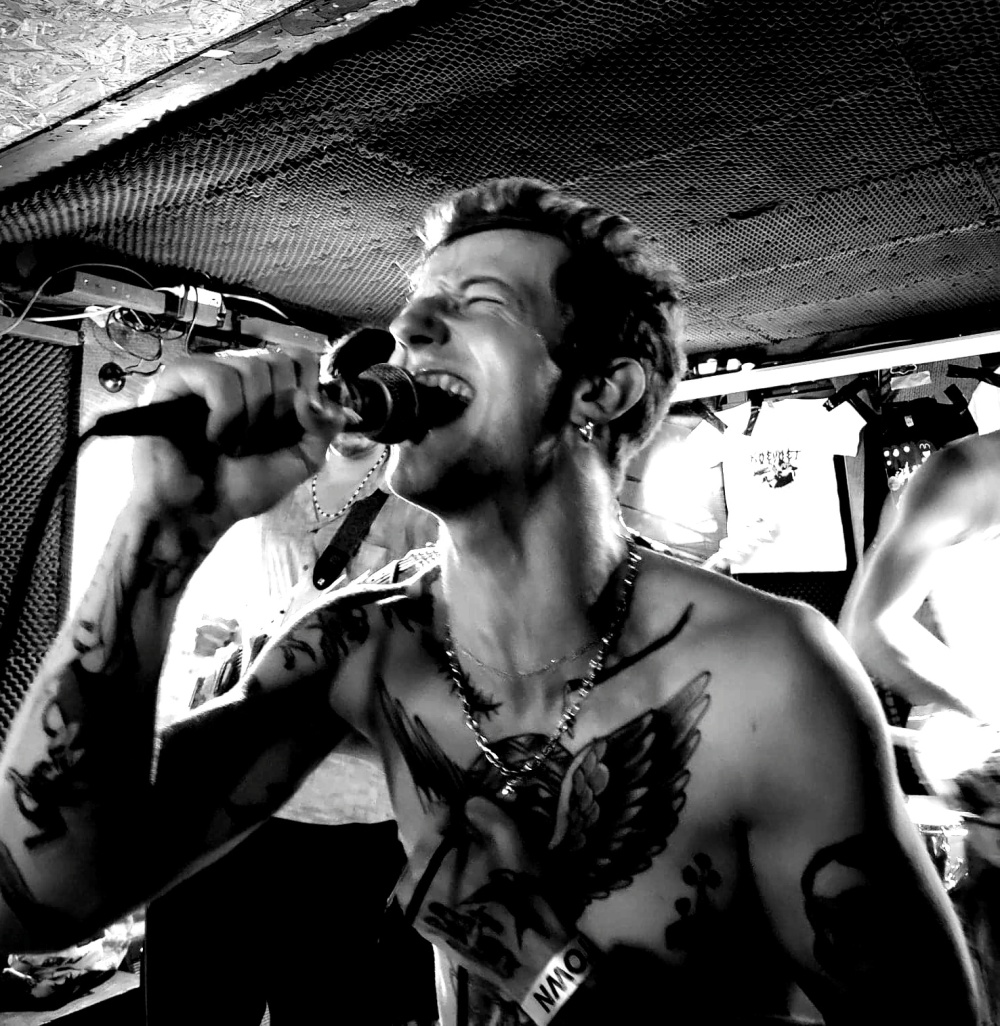 This is what shouting out is all about

And on their brand new single they attack FAT SCUM.

(Live photo by Turn Up The Volume)

Band: VIAL
Who: All female power-pop-punk Riot Grrls from Minneapolis
Works (so far): Grow Up (2019) and Loudmouth.

All proceeds of this new piece go to Gender Justice and Women’s Rights / Oxfam
and National Network Of Abortion Funds.

If Trump and his ass-licking apostles showed us one thing, it’s the widespread far-right viruses and the massive ultra-conservative presence in America. He gave them a voice
and a forum and they responded en masse by coming out of their caves and storming
the Capitol in the end. Trump made racism, sexism, and autocratic populism look acceptable for his true-blue red fans.

He also has his illegal hands (and judges) in the Supreme Court’s decision to overturn
Roe v. Wade and turn the clock 50 years back for women in the land of the free and
the home of the brave. And that’s what this new razor-sharp-cutting ripper is about.
Hands off a fundamental, human woman’s right. Very loud and very clear.

“Slide the rug out from under me
And take away my reproductive rights
I’m just an incubator
Yeah, a vessel to create unwanted human life
Yeah take back laws, why don’t you?
I’m sure you didn’t have to try
Doesn’t matter if you did, anyway
‘Cause living here still makes me wanna fucking die”

If you don’t know the mean Belgian rock machine RHEA yet,
I’ll give you 5 reasons why they should be your next favorite gang.

1. Their sizzling powerhouse sound is bigger than the cathedral of Notre-Dame de Paris (before the fire). Think Australian bulldozers Wolfmother and badasses Queens Of The Stone Age. Pretty Herculean, right? You betcha.

2. Their 2020 debut LP LUST FOR BLOOD is a monster of a record. A tsunami of rollicking riff rippers, propelled by a merciless drums/bass turbine and a charismatic motormouth in the middle.

.
3. On stage, they rage and rush without brakes or breaks with all cylinders on.
Here’s a very loud and very clear idea of their blitzkrieg bluster when rollin’ live.

5. These muttafokkers are about to take the world by storm.
Don’t miss them and don’t forget where you read this news first! 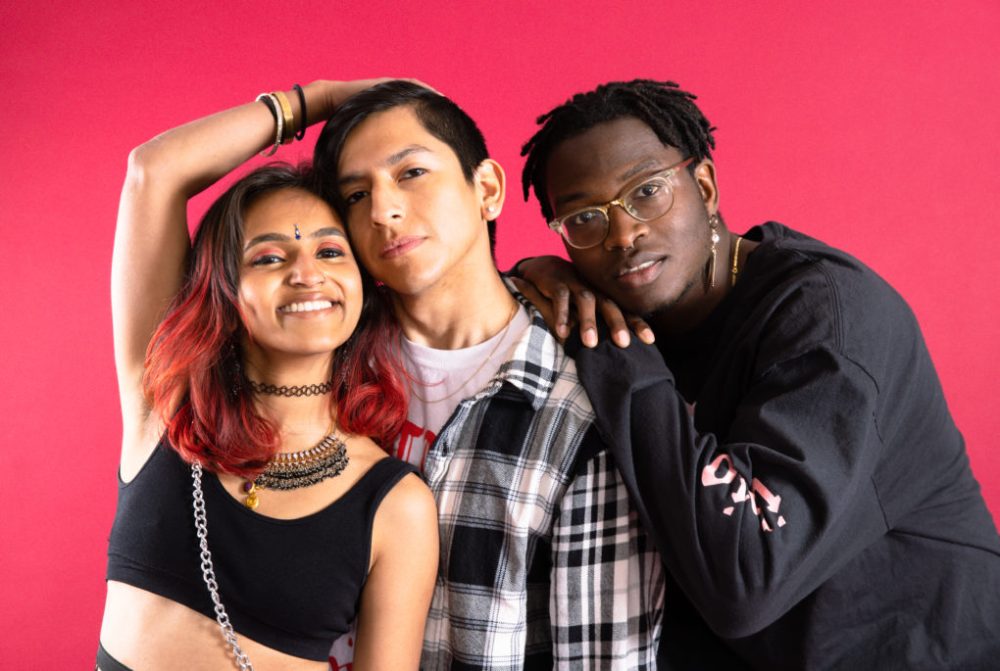 New single: I’M NOT CRYING YOU ARE CRYING
Second shared piece, following lead single nothing (in my head)
from their upcoming debut album Love Me Forever.

Ashrita Kumar (vocalist): ““crying” is the one song on the record that I didn’t start with a particular direction, just raw and unfiltered emotion. As the first song on Love Me Forever, it kicks the record off with a panicked denial, an immediately attacking response to the question of “are you okay?” untrusting and doubtful of the intent and sincerity of that question.”

Turn Up The Volume: Warn your neighbors before this jagged juggernaut starts blasting out of your speakers. Why? When you combine the larger-than-life wall-of-Aussie-sound of Wolfmother and the clear-cut razzmatazz spits and sneers of Amy Taylor, the punktastic motormouth of Amyl And The Sniffers, you’ll realize that the (il)legal amount of decibels will go through the roof. And that’s what exactly happens right here. Tons of vigorous vitality available here. 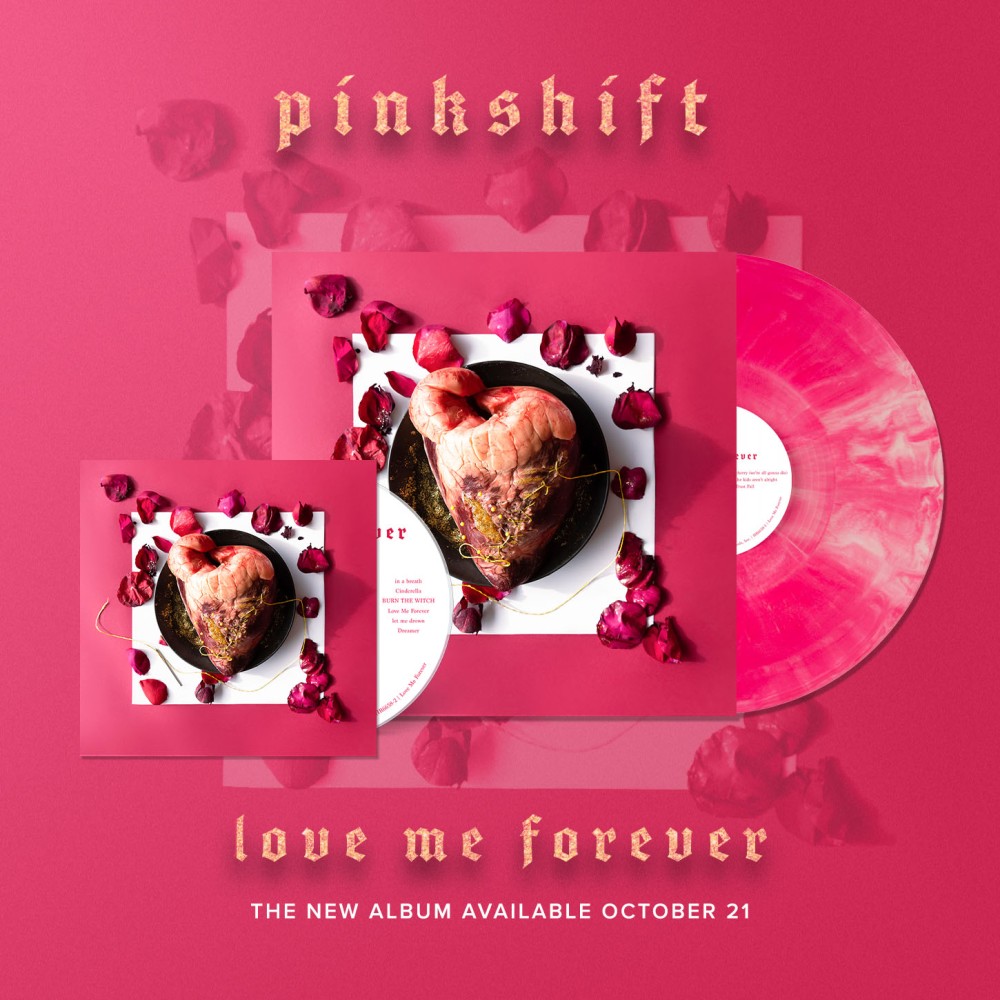 All info and pre-order facilities HERE 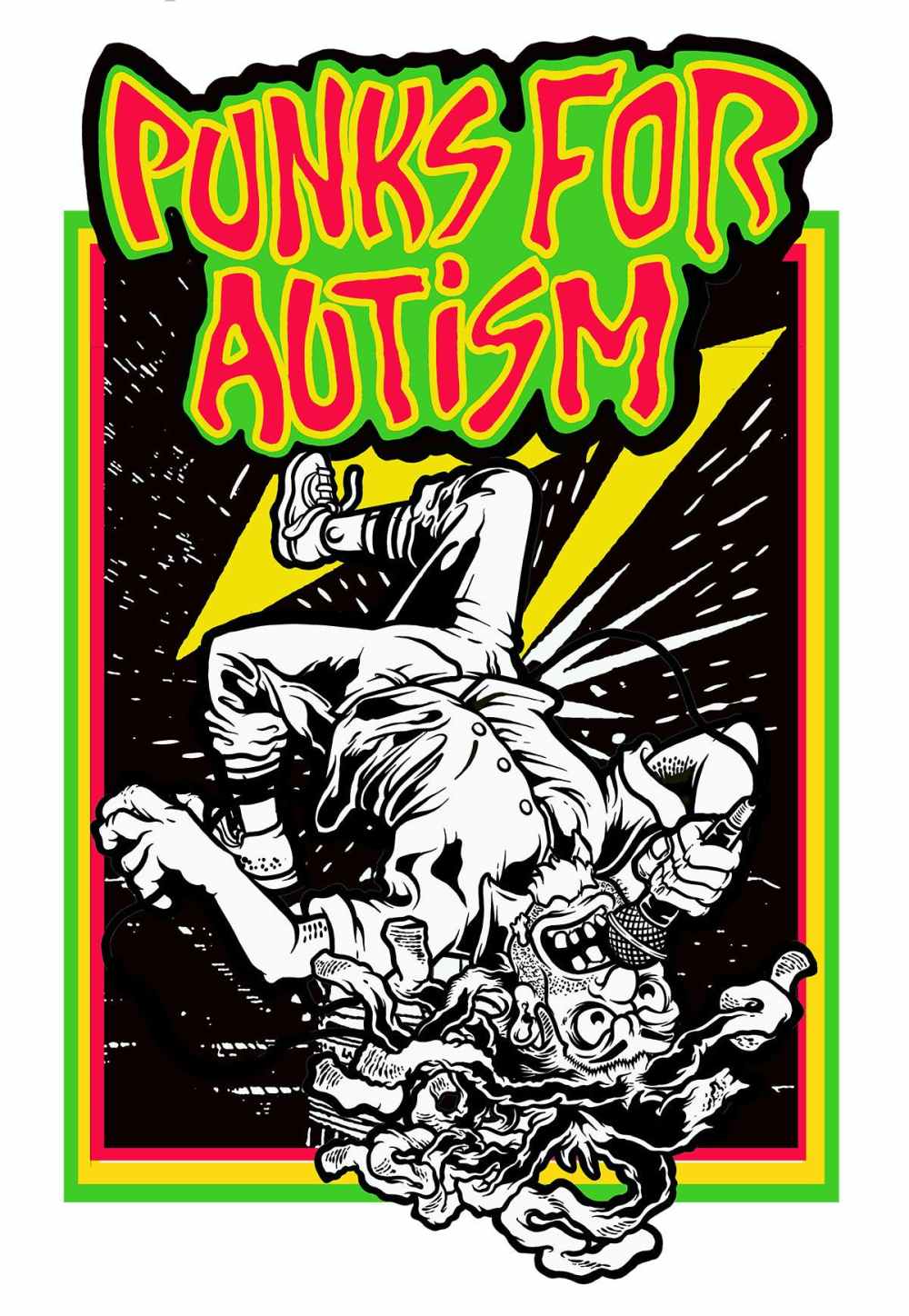 Steve Lombardo is the founder and driving force behind San Diego‘s charity operation PUNKS FOR AUTISM. A collaboration with super talented artists of all backgrounds to create underground apparel for this generation that helps drive Autism Awareness & Acceptance. Punks For Autism is an official 501(c)(3) nonprofit organization. Donations
are tax-deductible to the extent allowed by law.

Lombardo: “As the father of an autistic son, I’d often see various generic apparel supporting autism that either looked like something you’d get for free for participating in a race or something your grandma would rock…not that we all don’t love our grandmas, just not necessarily their attire.”

Funds for PFA come from the sales of t-shirts, mugs, hoodies, baseball caps
and other stuff, all designed by tattoo artists and illustrators from the U.S.
and beyond.

Rippers that make Turn Up The Volume screaming out loud 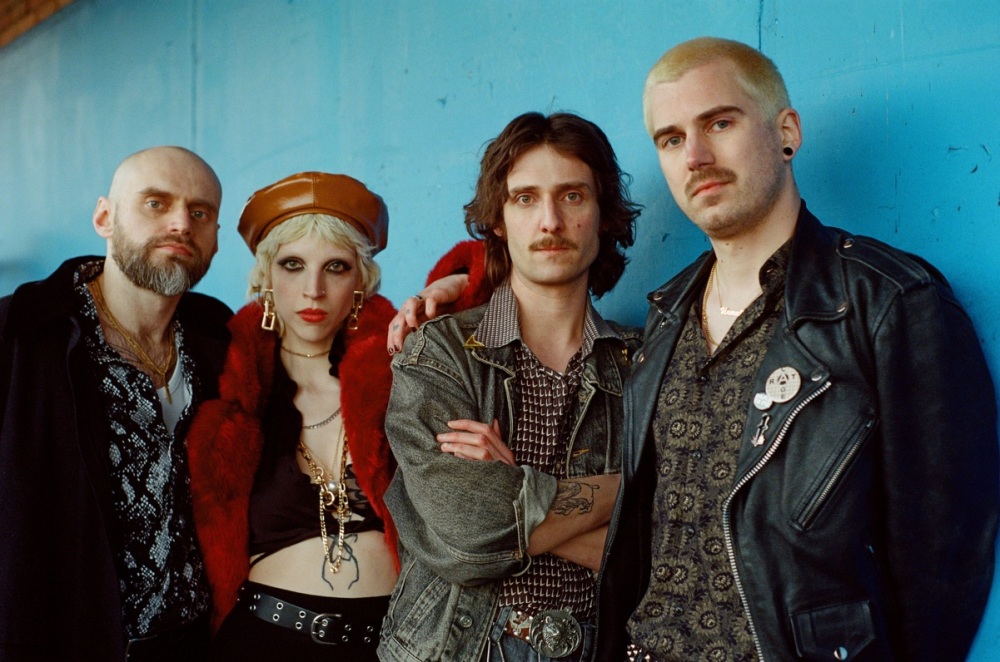 Jakbo Fast (guitarist): “Metallica and Sabbath are the intersection that we all
agree on, while the latter have influenced my guitar style. Even though the songs
are more punk than metal, that’s where they come from.”

Turn Up the Volume: Expect a riotous sucker-punk-punch going everywhere
fast with dash and panache. Crazed vocals, Black Sabbath whangs, psychopathic
guitars, and a loud and clear turbo swagger. Watch your back Lucifer, they are
coming after you with a jagged knife. No wonder they already toured with the
awesome Amyl And The Sniffers.

These muttafokkers do not suck. Trust me, you will get thunderstruck.

Lauper: “In my childhood, women didn’t have reproductive freedom and 50 years later
we find ourselves in a time warp where one’s freedom to control their own body has been stripped away. When I wrote this song with Mary Chapin Carpenter in 1991, we wrote about
two little girls who dreamt of stretching their wings like the pigeons they watched that flew above them. They dreamt of being free. But freedom then for women and unfortunately now comes at a big price. If we don’t have control over our own bodies then we have no real freedom. We are second class citizens. We need to mobilize. We need to let our voices be heard.”

The song was inspired by the death of a childhood friend of Lauper‘s
who got pregnant in her teens following a back-alley abortion.

(Image on top: cover of Lauper‘s best of album)