Combine the flaming intensity of Rage Against The Machine and the razor-sharp rants of Body Count and what you get is San Antonio‘s hot-tempered cross-over rockers SAVING JACKIE. Wait, there are two notable differences. No slams about politics, but a pure lust
for life credo, and instead of a testeron-driven frontman we have the wonderful Jenny
4C Ramirez leading the troops with vivid gusto and vigorous bravado. She raps and hollers like the best with a high-powered voice you can break walls with.

The debut EP of this mettlesome turbo is a head-banging triumph.
A storming eruption of illegal decibels and deafening riffs. Yes!!

So, listen up, Zack de la Rocha and Ice-T. From now on no more male-dominated
metal-rap-dynamite. Make way for Jenny and read carefully what she told Turn Up
The Volume. But, as usual, we start interviews with music. Let’s roll…

Who is JACKIE and why has she/he to be saved?

In July 2003 we played our last gig and we took a long break. As time went by I wanted
to get a band back together again with my Brother one last time for fun. We put an ad
out and John answered it. Myself, Anthony and John had a dinner/meeting and we left excited to jam again. Saving Jackie was formed January 2019. We’ve grown, we’ve changed and we wanted to keep Jackie in the name. As we thought of ideas, Saving Jackie was most fitting to us.”

Which track would you play to introduce yourself to people who never heard of you?

“I think we all would say, My Faith Is Larger. It’s a hard-hitting, gritty and in your face song. It’s a great introduction to our band and gives a taste to what we sound like.”

.
The band wants to spread a message of redemption for a new life.
How should we imagine that new life?

“As Saving Jackie, our lives have changed throughout the years. Most of us have Families, Spouses and Children. I feel like I have a new life personally. As a lyricist, I write about my pain and triumphs in our songs but my thoughts are like I’m writing in my Diary. My faith is larger than the negative voices that play in my mind. Our songs reveal a positive message for everyone. I’ve struggled with depression, suicidal thoughts, deep dark places in my mind mixed with being an alcoholic and addicted to nicotine.

As I’ve grown I became sober and I’m in a way better place. I’ve made life changes and I never gave up. We’ve been told many times we’ve been encouragers to others. New life comes with change. People relate to my lyrics, life is hard and some like myself have had bad health diagnoses. I write for myself as an outlet and not knowing others are getting a positive message from me being transparent about my journey. I’m grateful I’m still alive after all these years and I hope others feel the same about themselves. I’m all for positive change and living the best life I can live.”

Recently the band shared its first video clip. One for the titanic track
MY FAITH IS LARGER. How did that came about?

“We wanted to make a Music Video and we concluded on taping for My Faith Is Larger. That song has been played the most out of our EP. My Brother did the research & he booked everything. He’s the Talker and Mastermind of Saving Jackie. He had the foundational ideas. We visited the video location before we concluded on it.

It was filmed during the Pandemic so we didn’t have an audience there. We kept it under wraps because of that. Overall, It was an awesome experience all around. We can’t wait to make another one. We’ve had a great response from it. As we’re growing as Saving Jackie we hope to get more Subscribers to our Youtube Channel.”

Do siblings in a band fight all the time or get along and rock out?

“We get along and we rock out. We love each other and respect each other because we’re family and musicians. He’s also our band leader & every once in awhile I may not like some ideas, but he does things that turn out positive & takes me out of comfort zone. I trust him. We have our sibling connection. We laugh without talking, we just look at each other and we crack up.

We talk almost every day or we text each other outside the band whether it’s personal family stuff or just band work. He’s the talker and I’m the 1 behind the scenes working
on most of our social media outlets. I work on pictures, videos, posts, merchandise and shipping. He networks, books and sets dates for practices and virtual/performances. We RARELY argue.”

A lot of musicians came up with a cover of other artists’ songs during
these bizarre times. Which one would you pick to trash and smash?

“Great question. We were asked to take part of a Mortification Tribute back in September 2020. We picked Arm The Anointed to cover. We had a great time doing it. We also did our rendition of Winter Wonderland for Christmas 2020. We rocked it and I sang. We worked hard on it and we laughed so much making it. That’s what it’s all about. We enjoy making music and we enjoy each others company. We’re all like Family.”

Suppose you were asked to rewrite the National American Anthem,
what would be the outcome in sound and vision?

“We would leave the lyrics the same, but rock it out
with our Saving Jackie signature sound.”

“We have a great fanbase for Saving Jackie. It’s pretty fun. We prepare for it and pray that whatever is done that night we meet new friends and inspire someone. We’re upbeat, powerful and we take over the stage when we’re there. You’ll feel our presence and you’ll also feel like your part of our family.”

What do you hope for in a post-Trump America?

“We love and care for everyone. Our band is not involved in any political climate. We are a band that’s focused on love and encouraging everyone. We hope to continue doing so in our music now and in the future. Whatever time holds and whoever is elected President; we move forward with that always in mind and hope to make timeless music.”

Your favorite rap/rock/crossover bands and songs?

“Faith No More, Red Hot Chili Peppers, Rage Against the Machine,
Papa Roach, Beastie Boys, and Korn. To many songs to list by name.
We feel the name of the bands would give you a good idea.” 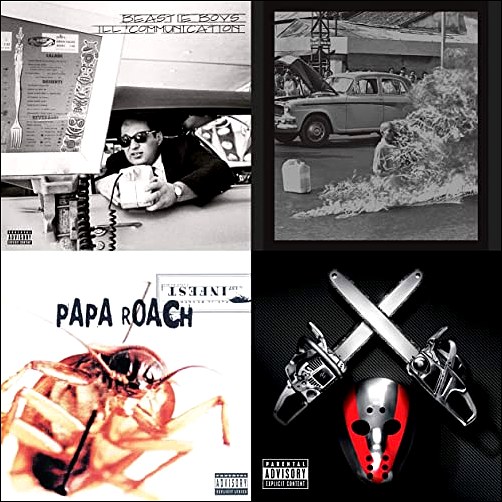 Which band would you pick to tour the world with?

“We’d all say, Rage Against The Machine. Personally, because we’ve been compared to them. It would be an honor to open for them and it would be a great lineup. Who knows maybe one day it’ll happen after Covid. That would be awesome! Someone make that happen”

Any new 2021 music for SAVING JACKIE?

“Yes. We recorded 4 new songs in the Studio late September 2020. Covid pushed our release date back, but we’re in the final mixing stage. As soon as our songs are ready,
we’ll send those songs along with our previous 3 song EP to get Mastered. We’re “hoping” on releasing our first Album by April 2021. We’re really excited about this huge project.”

Thank you very much Jenny for this chat.
May the road rise with Saving Jackie!