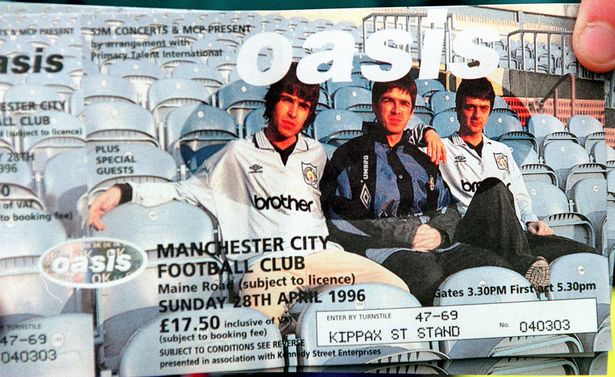 Six months after the release of their breakthrough masterwork album (WHAT’S THE STORY) MORNING GLORY? Manchester legends OASIS played two massive sold out concerts at MAINE ROAD MANCHESTER in the former football stadium of their beloved MANCHESTER CITY team. On 27 and 28 April 1996, the Gallaghers & Co wrote history. Joined by 80.000 (over the two days) the band had their dream come true by playing the ground of their Sky Blues squad. The two historic days were captured on film. The docu
‘…THERE AND THEN’ was released on video in October 1996 (still have my copy) and on DVD in 1997 (re-released in 2001). Supersonic stuff! Let’s look back in ecstasy.

– CIGARETTES & ALCOHOL –
(One of my all time fav Oasis live knockouts)

– I AM THE WALRUS –
(Oasis made this killer their own)